The buildings at 1420 & 1430 Locust Street were both designed by the celebrated Iowa architectural firm of Proudfoot Byrd and Rawson in the early 1920’s. The buildings were originally built with showrooms facing Locust Street with workrooms occupying the back 2/3 of the floor plan. The occupancies have changed several times over the years but were primarily used as auto dealerships during the period of historical significance. This area of Des Moines was referred to as Auto Row because of all of the dealerships and auto related business that were populating the outskirts of downtown.

When Slingshot got involved, the historic fabric of the buildings had long been covered with dropped ceilings, carpet, and drywall.  We worked with Jennifer James and LSI to place these buildings on the National Register of Historic Places to make them eligible for state and federal historic tax incentive programs.

We have currently completed the shell and core design, which includes a rehabilitation of the exterior of the building and new interior life safety/egress systems on the interior.

The architectural challenge on this building was to make the back 2/3 areas (former workrooms) visible, accessible, and desirable tenant spaces. Our solution was to bring in entrances from the side and create a large steel, wood, and vegetative entry wall. We added several windows to each building along the parking lot and are bringing back large skylights on the 2nd floor to allow more natural light into the spaces. Slingshot is working with Modus Engineering to make this historical building environmentally sustainable and will be seeking LEED Certification.

Slingshot Architecture has been recognized by Preservation Iowa as a recipient in the 2014 Preservation at Its Best Awards. The Des Moines Social Club won the project category of Adaptive Reuse and the Fleming Apartments won honorary notability for the category of Adaptive Reuse. The award recognizes and honors organizations, projects, and programs whose work demonstrates a commitment to excellence in historic preservation. Special thanks to the Des Moines Social Club & Nelson Construction Services for making these projects possible. See more about the awards. 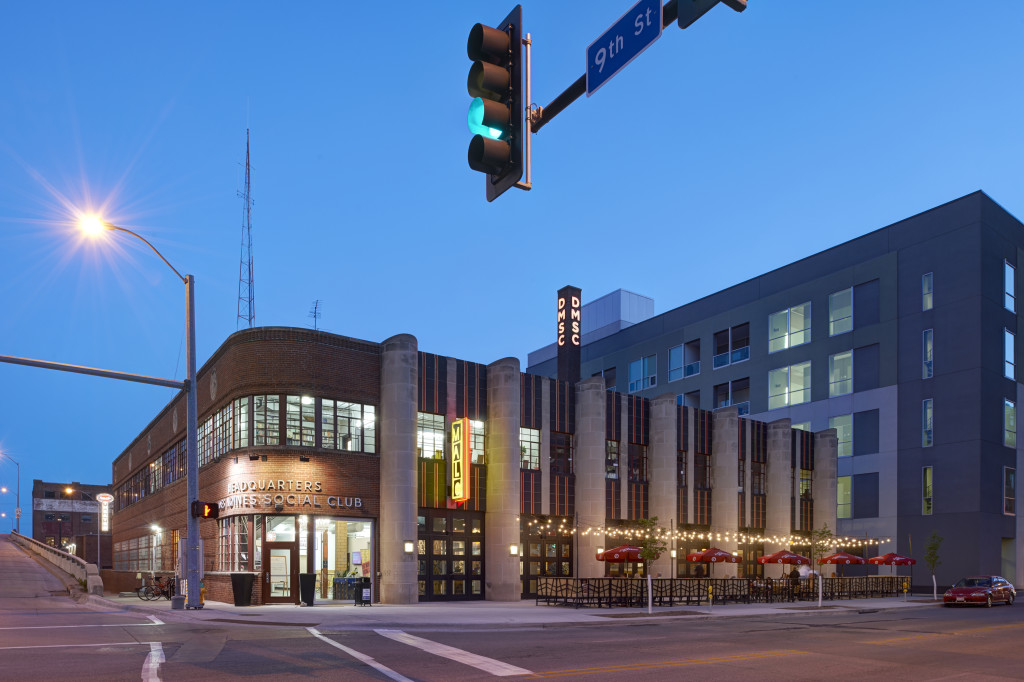 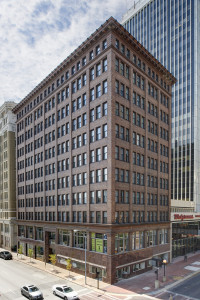 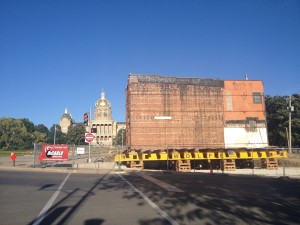 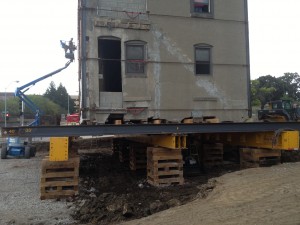 September 26th is fast approaching and everything is quickly moving forward to prepare the Rowhouse at 709 E. Locust and its new site, 425 E. Grand, for the big moving day. At the old site, the temporary supports are in place under the first floor joist and the grade has been leveled below, previously the basement. Norden Hall is prepped and ready for the moving equipment to roll under and haul it to its new home. 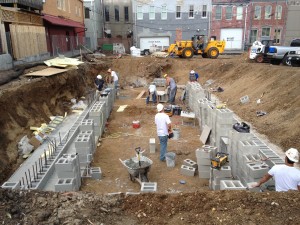 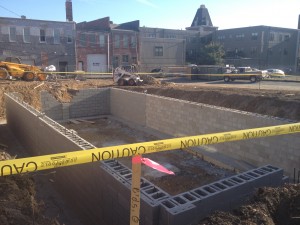 At the new site, footings have been poured and the CMU basement foundation is being set into place. It has been great to see the progress, especially in the last two weeks. Norden Hall is moving and we hope that everyone will come out to watch on Thursday, September 26th, moving begins at midnight. 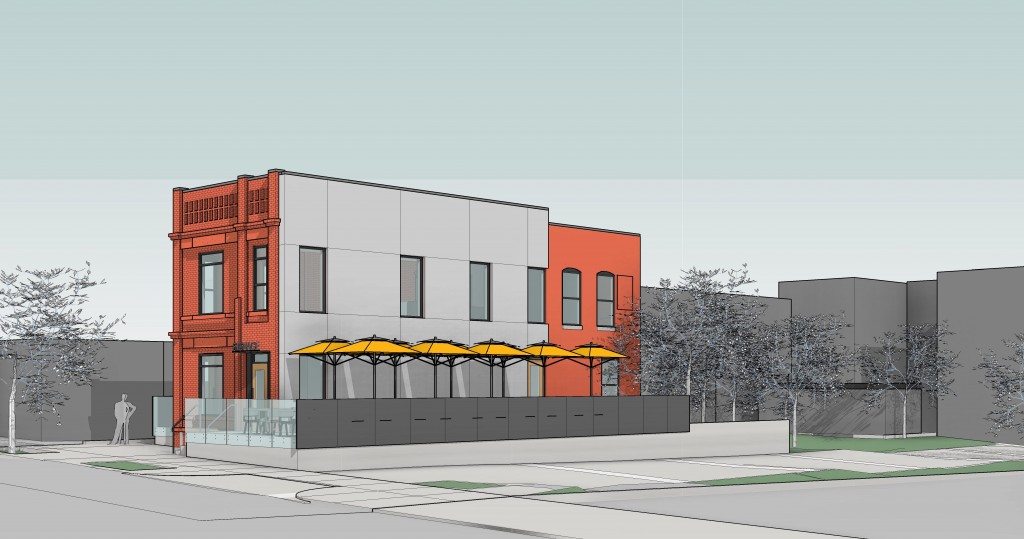 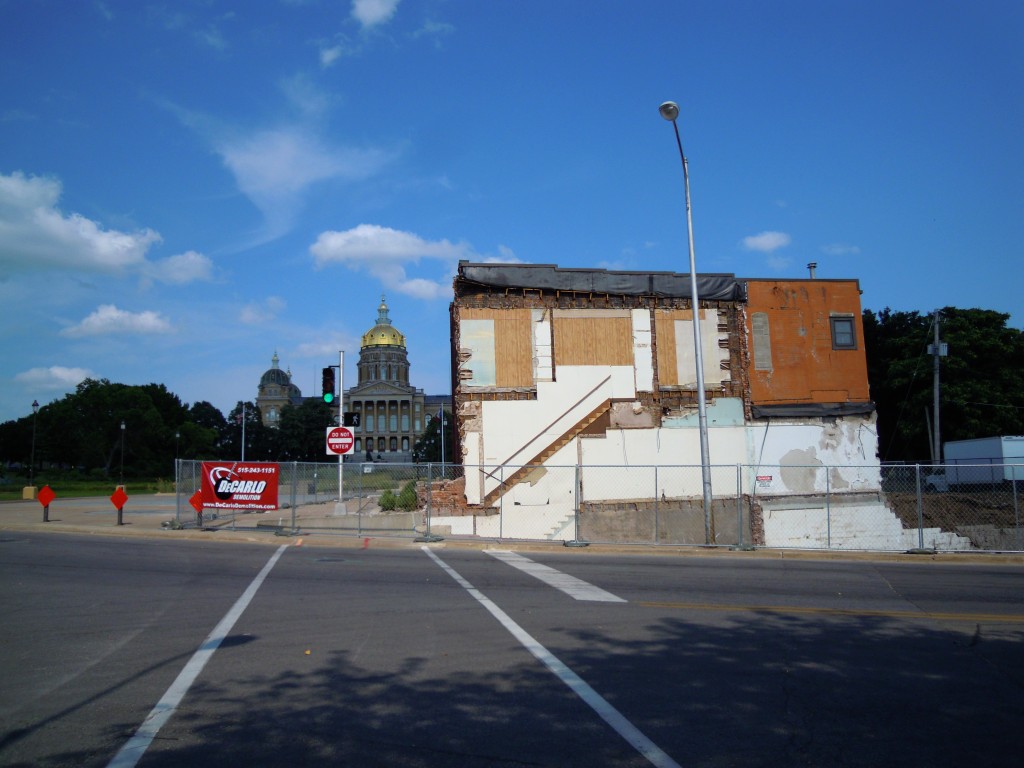